I want to be real when I write.  I want to be honest and sometimes what that looks like is not.... Well its not all rosy and bright.  After struggling for a time with some things going on with my daughter, I decided to have her "tested".  I wanted to see if there was something going on with her that I couldn't identify.  The problems we were having were not just your average tweenageer growing pains.  She was not nor has she ever been a defiant child so I know that her difficulties were deeper than the surface level responses that I got from other parents as I queried them about what challenges I was having with my daughter.  Ahkiba has always noticed the fine details of things that people didn't seem to notice in pictures, painting, and murals, but at the same time she missed the overall pictures for the small details.  She's gone to very good schools, but no one ever caught it.  Dare I say that one of the schools that she attended would have probably made it even more difficult to identify her challenges because it catered to a very active style of learning.  So it was not until she changed schools, got into higher grades that some things became more apparent.  Even then it was difficult because she was with her dad for the school year so identifying what was happening with her was damn near impossible on weekend family time.

When she came back home for the new school year, I started noticing (even more) the constant reminders I had to give her about picking up after herself.  And not just your normal messy kid stuff.  But, I would tell her to take her plate, fork and cup to the kitchen and usually one or sometimes two items would make it to the kitchen, but never all three.  Don't let me add, "and take your shoes and book bag to your room too!" at the same time, I'd be lucky if anything made it to its rightful place.

Something was amiss.  I couldn't put my finger on it for quite some time.  But after many conversations with my girlfriend  who had spent countless hours observing the same things that I had seen, she finally said (out of concern and exasperation along with me),  you should get her tested.   This was no easy matter.  We'd spent I'm sure what amounted to hours discussing what the problems were and possible solutions.  She helped me get her very organized from top to bottom. Even after that, no change.  I began making lists of everything she needed to do, and then instructed her to make her own lists, of what she had to do daily.  My thought process was that this would create a sense of ownership and responsibility if it was her duty to be aware of and check her list every day.

It was a source of frustration and aggrivation because I felt like I was doing everything I could possibly think of to help Ahkiba get and remain on track but nothing ever really worked.  In the midst of it all I learned that it takes time.  I could stand to exercise a bit more patience (it is not my strong suite).  But most importantly I had to change my strategy of approaching all that was going on.  In the midst of it all. After talking with her Doctor, she sent us to a therapist and after evaluations by the therapist and teachers, it was determined that Ahkiba has ADHD with inattention.   Having a diagnosis finally I began to read up on it.  I didn't want to overwhelm myself and try to make what her symptoms appeared to be to me fit any particular disorder.  I will admit that having a diagnosis was relieving but at the same time it is a journey to acceptance on so many levels.

Mentally I've been repeating "I have a special needs child".  What image do you conjure up when you see those words?  My child isn't like average children at age 12 she needs a lot more guidance and one on one direction.  At times she can be extremely clingy uncomfortably so at times.  And she has the body of a developed young woman so it doesn't help that her brain function and her appearance don't exactly match. What I have learned is this, "do not compare your child to yourself at their age, don't compare your child to other children at their age.  Your child is unique and you have to accept and work with them as they are where ever they are in this life journey."  That is where I had to begin.


I hope that over this time of growth and learning that I will able to better pick my "battles" so that even while we learn to deal with the stresses of ADHD we continue to build the mother daughter bond that helps her grow into a healthy mature well adjusted young woman whether or not she is still addressing the effects of ADHD. 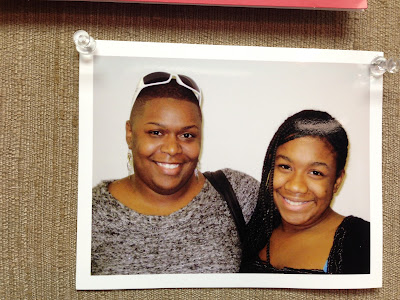